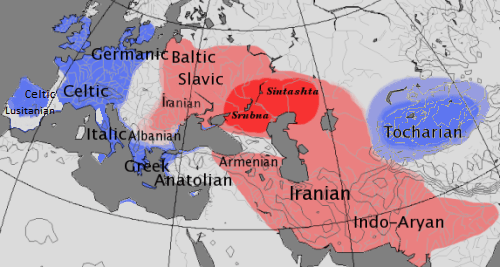 (…) The table below shows the traditional reconstruction of the PIE dorsal consonants, with three series, but according to some more recent theories there may actually have been only two series or three series with different pronunciations from those traditionally ascribed. In centum languages, the palatovelars, which included the initial consonant of the „hundred” root, merged with the plain velars. In satem languages, they remained distinct, and the labiovelars merged with the plain velars.[1]

The centum–satem division forms an isogloss in synchronic descriptions of Indo-European languages. It is not thought that the Proto-Indo-European language split first into centum and satem branches from which all the centum and all the satem languages, respectively, would have derived. Such a division is made particularly unlikely by the discovery that while the satem group lies generally to the east and the centum group to the west, the most eastward of the known IE language branches, Tocharian, is centum.[2] Each of the ten branches of the Indo-European family independently developed its status as a centum or satem language. (…)

[This is the translation of the German original which is impossible
to translate in rhyme because of the word plays. The English version
is also not humorous as a result. The German original is given below
the English explanation for those of you who can read German.]

In Germany one still says „Summe” [Sum]
And Bread is placed in a „Kumme” [archaic, Bowl]
Sometimes one is „Schumme” [dialect, confused]
But does one know a „Humme”? [non-existent word]

[Explanation of the above verse: If the satem-centum shift had
actually occurred, then Kumme would be the original word which had
degraded to Summe and Humme, as also Schumme. This of course is
absurd – and did not happen. Summe [SUM] is the original S-Form. It
did not derive from a K-Form.]

Everyone counts numbers together [samt]
All added and together [sämtlich, summernd, gesamt]
To this comes a „tenth” [Zehnt]
Which longs for a hundred? [for 10 also has the root word base of 100]

[Explanation of the above verse: Many so-called „count” words have
retained their initial S-form. SUM as also the English word TEN
(German ZEHN, which is older) are examples.]

Now an English Count [word play on count] makes known [kund -a sound-
related term]
Together with his dog [Hund] on the sound [Sund, i.e. on the beach of
a bay]
That he is truly healthy [geSund]
And that is no lie! [Schund, literally, scound-relling]

[Explanation of the above verse: Latvian, i.e. proto-European SUNS,
SUNIS viz. dim. SUNITis („dog”), became German HUND and English
HOUND. So how did Germanic HUNDred come to have the same beginning
four letters as their word for dog HUND. This is because, as we see
in verses below, the old Gothic term for thousand was thuSUND and
thus SUND then also must have meant 100 at some ancient time,
degrading to HUND, viz. hundred. Based on the German ZEHN „ten”, this
too was related, i.e. ZEHNTE = „tenth”. SUND and thuSUND would thus
logicaly have been variant number forms of the same root, meaning, as
we shall see below „collection, heap”. Nothing indicates that
original forms were satem forms such as KUND or HUND. Rather, these
are later degradations of the original S-based roots.]

Ten [Zehn] the fingers on the hand [Hand]
And ten the toes for the Sand [German ZEHEN „toes” is almost
identical to ZEHN „ten”,SAND is also related, as we shall see]
He lived together in chambers [Kammen]
With wife and child together [Zu-Sammen]

[Kammen „chambers” did not give rise to „zu-Sammen” [together] but
rather the other way around. The K-Form is an application of the
concept contained in the initial S-Form word. According to the satem-
centum shift theory, KAND should have become SAND or HAND, which of
course, it did not. The origin for English HAND here is Latvian
SANITE „side” diminutive form, which became KANTE as in German „edge,
side”, and that became HAND. The linguists have no clue for the
origin of English SAND but likely is a relationship to Latvian SANEST
which means „collect” and is applied to „drifts” of sand or snow.
This idea of „collected” then of course shows that such apparently
unrelated words as SUND, SAND, SIMT, SUM are all related to an
original concept of „collected, collection, heap, sum”.]

Of course, we could see that.
So what had historically happened?

Far in the East one found the Latvians
Who place their bets at a hundred with the word SIMTS [i.e. an older
SUM word variant of SUND]
Russian STO [this is a degraded form of an original word for 100] +
German WASSER [water]
Gave the Germans Hundertwasser [„HundredWater” – a well-known artist
in Germany whose original name was Stowasser, but who Germanized his
name to Hundertwasser, which helped to make him quite famous]

But the Goths counted
So that ThuSUND were a Thousand
Which we have retained in English
as „ThouSAND” for many years.

[Explanation: The retention of THOUSAND from the older THUSUND shows
that the S-Form is original and in the word thuSUND, i.e. THOUSAND
has not changed the SUND.]

Now thought Jacob Grimm
That’s all not so bad
Just because SUND became HUND
Why should ThouSAND also?

So, he announced, that CENTUM were the Western languages
and SATEM the Eastern languages [of the Indo-European pantheon]
Concluding [erroneously]
That language came from the West!

[Explanation. In Grimm’s days, the oldest known written cultures were
Rome and Greece and of course, people then thought that language must
have originated there, rather than the East. Grimm, with more
knowledge, could just as easily have pronounced that the process of
change went from East to West and not vice versa, which would conform
to the migration patterns that modern-day scientists have worked out.
But Grimm did not have this knowledge in his day and the clueless
linguists have blindly followed him. We can excuse Grimm, as he lived
in a different age, but we can scarcely excuse the Classical Scholars
and linguists of today, many of whom have their heads in the sand
linguistically and simply ignore modern evidence that languages such
as Latvian – long unwritten – are far more archaic than ancient
written Latin or Greek.]

This pleased the Latin scholars
And Rome is a much finer place linguistically since then
Only that which was a written language can be proven
And thus is to be seen as the original source of language [for those
languages not written. This is a foolish assumption. Whether a
language becomes written or not at some point in its history has
nothing to do with its actual antiquity.]

In Athens there were feasts
Ancient Greek was celebrated
Nothing older in writing was known at that time
So, spoke Zeus, „we knew it all along”.

But of course it is undisputed
That the Grimm Brothers wrote many a myth
So one is entitled to ask
Was the previous name of the SUN actually KUN (KONNE instead of
SONNE). [Of course not.]

[Rather the fact is: The sun anciently was called:]
Latvian SAULE, Roman SOL
Greek HELIOS
So is it not curious
That no one calls the Sun KELIOS.

Still, this matter undecided
Would have remain unresolved
If we did not have Asterix
And the wild boar hunter Obelix.

Because, of all of these animals
That we domesticate today
Ever since 10 thousand years ago
Pigs have been the primary ones.

These long lost words of a dead language
Still live today because Latvian CUKA („pig”), pronounced TSUKA with
a long u) is nearly the same as Sumerian
And from this, our English word HOG has derived with the S going to H.

Thus the matter is clear.
The Satem-Centum division of the languages of Europe is a fairy tale.

[In fact, the current hypothetical Indo-European root
for „hog”, „swine” and „sow” is *sû- and it is clear that the S-Form
is the original form. See http://www.bartleby.com/61/roots/IE507.html]

Here now is the original German poetic rhymed version. It is much
better than the English explanation above, but it can not be
duplicated in English.